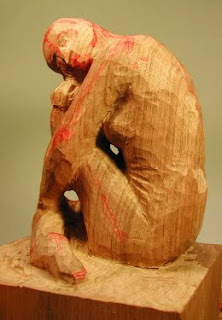 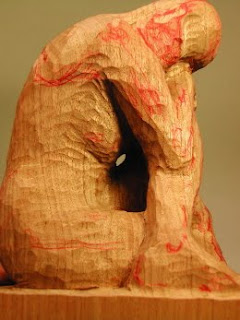 After prodigious effort and lots of sweat Naiad has another void- this one above her left leg. I was anxious about doing this, but I needed to be able to visualize the top of the leg as well as the location of the breasts. Looking at the photos it looks as though the hole should have been above the breasts, but at this point I don't see the room that would be necessary for that. 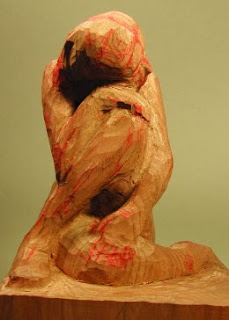 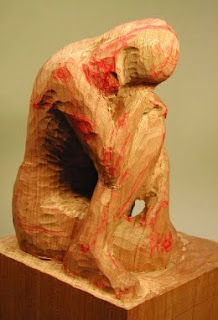 Here on the front and front right you can see some progress. Not as much as the hours I've spent would imply- since a terrible lot of time is spent in contemplation- like "duh- what do I do next?" Her right hand has been refined and located so that I could make sure that the cheek of the face ended up resting on the hand- not in mid air or half-way through the hand. I hate it when that happens. There has also been considerable thinning and rounding of the forms. 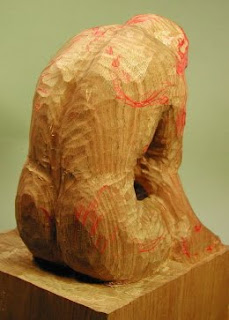 Pore 'lil thang still looks like a fullback but that is just so I still have enough wood for minor modifications as I go along. She will be thinning down and feminizing a lot real soon. 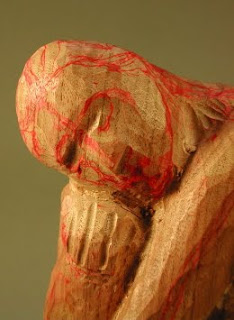 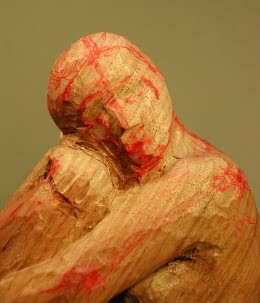 In the first of these face photos the orientation looks OK- though there was something I didn't like about it- didn't seem just right. I tilted and turned the carving so that I faced it head on and I could see my problems. On the right you can see that the vertical centerline is not bisecting the head- it is lopsided. That happened when I rashly decided to change the angle of the face. So either I need to put the face back to where it was- may not have a nose left if I do that- or recarve the head to match the face. Decisions, decisions. 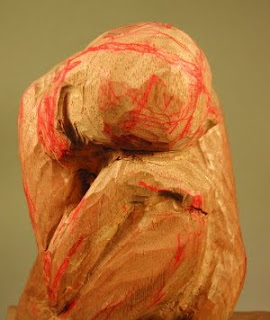 Here is a close-up of the top of the head- where I spent many hours trying to figure out how to do the hair. I have the same problem with my own hair. Go figure. One thing for sure is that the shape of the skull does not change depending on the angle, so that is what needs to be correct before any more details are finessed. The hand/cheek connection looks good so far- thank goodness for small favors.
Thanks to taking these photos and talking about problems and solutions I think I know what to do next.
Posted by Donna Menke at 11:55 AM